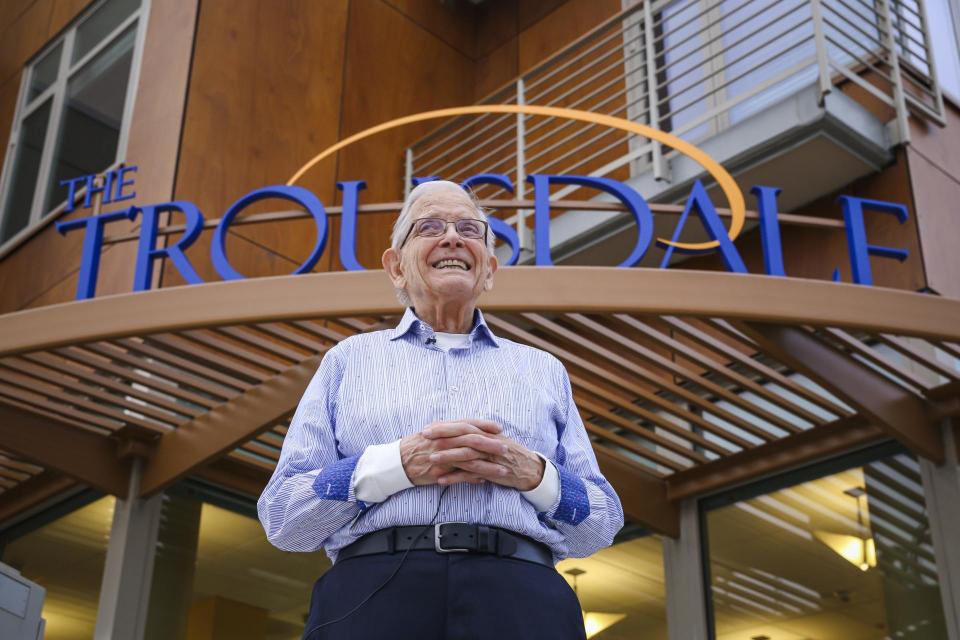 “If it was any other city, I’m not sure it would’ve been the same.” Few people love their hometown like Dale Perkins. The very first resident to move into The Trousdale, an Eskaton managed senior living community in Burlingame, California, Dale says he owes much of his extraordinary life to the city, including his evergreen art career. While most would argue his incredible work ethic and love of the craft are responsible for his success, he modestly insists it has a lot to do with luck and knowing the right people.

Born in Minnesota in June 1929, just months before the start of the Great Depression, Dale remembers a childhood spent exploring the outdoors. Finding he had cognitive differences that caused him to struggle with traditional subjects, Dale gravitated towards more creative interests like drawing and painting. “It just made me feel good. Not that what I was doing was any great masterpiece. But it was my outlet. Some people sing, dance, write. We all have our own ways.”

With his father frequently looking for work, the only medium the family could afford was basic pen and ink and the smallest of watercolor sets. While some parents might have asked their child to help support the family’s income, Dale’s did the opposite, sending him to the California School of Fine Arts at 12 years old. By 13, he was being mentored by a nationally syndicated cartoonist. Dale says it was the love and support of his parents and others that allowed the budding artist to bloom. “The more help you have from anybody, your parents, your religion, or whoever gives you hope and promise and support—those were all big in my life—that’s all you need.”

That support led to a college career he never anticipated, attending San Francisco State and then the Academy of Art University in San Francisco on a full scholarship. After graduation, Dale enlisted in the Army Reserves, hoping to join his countryman in Europe after World War II. Stationed at California’s Fort Ord instead, Dale served his nation the best way he knew how, creating artwork and recruitment materials for the Army’s Troop Information and Education service.

A bit of luck and a lot of perseverance eventually led Dale to the town he’d call home for over 50 years. Teaching in Oakland in 1960, overloaded and near burnout, he heard of a position teaching art to teachers in the Burlingame School District in California’s Bay Area. “The nation, not just where I was, but everywhere, was just starved for the arts. Music, art, they just wanted more!” Though Dale has taught workshops and classes at some of the most prestigious schools in the nation over the course of a five-decade career, he says working for the school district was especially meaningful and he attributes that to the city he loves. “It was Burlingame, really.”

It wasn’t just his teaching career that took off in Burlingame—Dale’s art has long been an integral part of the community, popping up all over the city in places like the Burlingame Chamber of Commerce, the Burlingame Public Library, and a variety of local businesses. The Trousdale itself displays two of Dale’s more iconic watercolors on the first floor of the building. Despite this, it seems almost impossible to convince Dale his talent is responsible for such success. “There were people in Burlingame that believed in me, supported me, a lot of people. That means a lot to me.” Indeed, Dale talks about all of his achievements with this same humility and appreciation for those who believed in him. “All accomplishments were beyond dreams I never dared to dream,” he says.

Far from leaving his working days behind him, Dale is still painting and drawing at 90, with both private and corporate clients ordering prints on commission. Though working out of his apartment has its challenges, Dale says it was the beauty of The Trousdale that convinced him to leave his home and studio behind. “We looked around, every 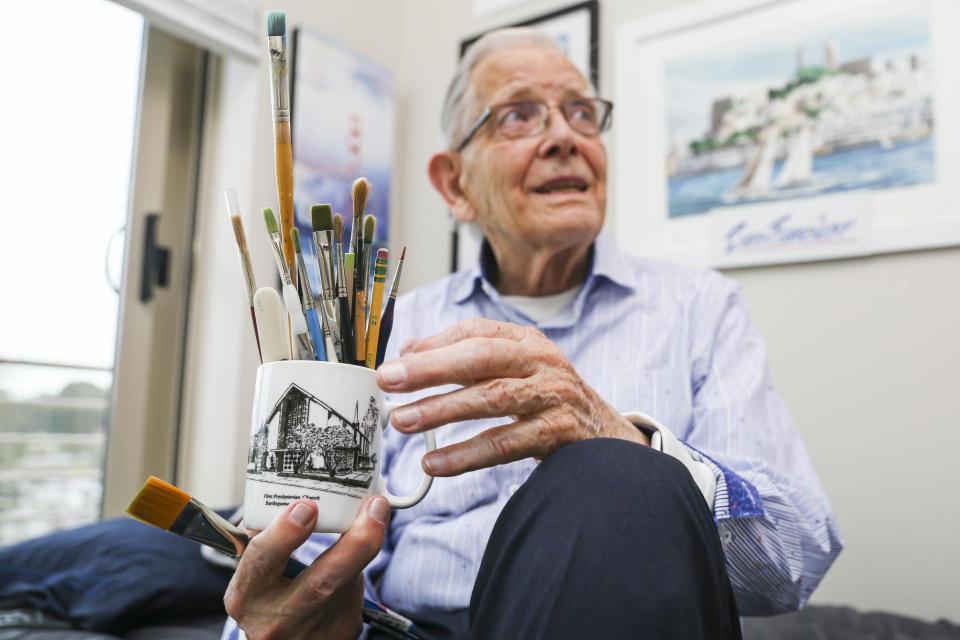 place. Six or seven of them. And what we liked about The Trousdale is we liked the light, and the color. I need light. I survive on it!”

More than an artist, Dale is a proud father and grandfather, with two of his grandchildren currently sitting at the top of the Filipino pop charts and boasting the title of “movie star.” The Perkins Twins have been touring the Philippines for the last few years, spreading their message of Christian faith and values to schools across the country. Dale’s advice to other young people chasing their own dreams is honest and straight-forward. “Doors will close, so open more. Find more. Create more. But keep pushing! If things look hopeless, and maybe they are, just keep going. Push, push, push!”

The walls of Dale’s apartment present a glimpse into Dale’s life as an artist, from the series of delicate floral watercolors to the collection of bold pen-and-ink political cartoons. While the art is evidence of a life filled with talent and dedication to his craft, Dale seems most interested in what lies just beyond the walls of his apartment. Looking out the window of his living room, Dale points out different streets and buildings in Burlingame, talking about each one with deep love and respect. “For 50 years, I lived up the hill. My history is here. It’s a time capsule. And that’s what I’ve tried to do with my room. I tried to remember the things that I did because I’d forgotten them. And I look around the room now, and hey, I feel good about it. I don’t have to show them to anybody, it’s just for me.” He offers a warm smile that reflects his unmistakable enthusiasm for life. “This view is the history of my life. And I am so lucky.”