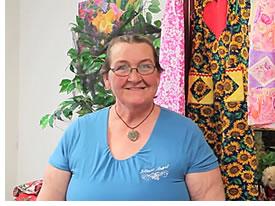 Eskaton Kennedy Manor resident Betty can make a pillowcase dress in under 19 minutes. She’s made over 15,000 dresses that are now worn by children in Kenya, Nigeria, Nairobi, the Philippines and many other poverty-stricken areas around the world — 41 countries in total. As a Mess Hall Sergeant in the Marines, Betty served 3,200 meals twice a day at Camp Pendleton. It wasn’t until 2011 that she learned to sew. Since then she has been making the dresses as fast as she can get her hands on pillowcases. Her label says Island Angel because, she says, an angel is watching over each child who wears one.

After seeing the reaction of a little girl who changed from her rags into a new dress, Betty said, “It’s a joy you could never express, putting the dress on a child. She believed I was an angel.”

In late spring 2014, Betty traded the views of the ocean from the Big Island of Hawaii for the views of the mountains surrounding Willows, California. Now Betty has encouraged many others to take the Pillowcase Challenge. More than 80,000 dresses have been delivered to children in need because Betty inspired them. She modestly says, “I just connect people.” Betty also makes aprons, wheelchair bags and bags for people who use walkers.