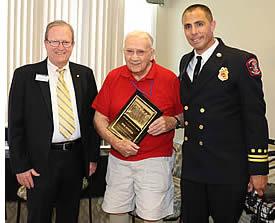 Bob Juniper moved to Pleasanton in 1944 and has since dedicated his life to work, family and contributing to his community. On June 11, 2015 at The Parkview Assisted Living Community, where Juniper lives today, Pleasanton Mayor Jerry Thorne, Pleasanton Fire Battalion Chief Joe Testa and a room of family and friends honored Juniper with a Lifetime Achievement award.

Two major accomplishments include his 18 years with the Pleasanton Volunteer Fire Department in the 1950s and 1960s, and his tenure as Post Commander of the VFW, where he raised funds to build local parks and the Pleasanton Senior Center. “Bob played an integral role in the design and build of the senior center, which opened in 1993 and today serves more than 1,000 seniors per week,” said Pam Deaton, recreations supervisor. Juniper trained Deaton when she joined the center more than 19 years ago.

Mayor Thorne shared the history of the Pleasanton Fire Department and thanked Juniper for his contributions to the community. Chief Testa presented the 92-year-old with the Lifetime Achievement Award. The chief spoke of the vintage photographs displayed on the walls of the fire station when he joined 20 years ago — some of which include snapshots of Juniper himself. 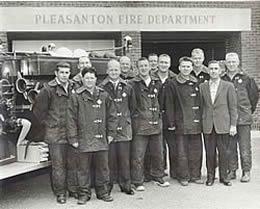 Juniper grew up in Nelsonville, Ohio, and enlisted in the U.S. Navy when World War II broke out. As a pilot, he trained flying tactics and instruments at the flight school in Pensacola, Fla. After 14 years in the military, he decided to move west with his wife.

Only 2,700 people lived in Pleasanton when Juniper first arrived more than 70 years ago. He first worked at a toy factory on Rose Avenue, but eventually took a job at a local grocery store and retired after 30 years.

“Bob led such an interesting life and has always given back to his community,” said Sylvia Zaininger, executive director of The Parkview. “We are so grateful to everyone who attended the award ceremony and a special thanks goes to City of Pleasanton Mayor and Battalion Chief for taking time to honor such an accomplished man.”