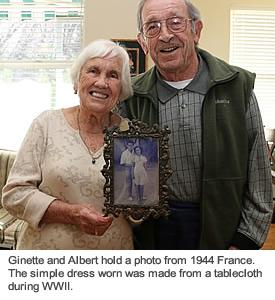 Béziers is rich with history, being one of the oldest cities in southern France. Near the Mediterranean, Béziers was occupied by the Germans during WWII. In 1944, as the American troops marched in to liberate France, the citizens came out and danced in the streets. That’s when Ginette met Albert. They were 17 and 19 years old.

A year later, they had a modest wedding. “We were so poor. So for the wedding my father and his father got food from the black market. My grandmother fixed the whole thing. I borrowed a dress,” reminisced Ginette as if telling a story out of a fairytale. After the wedding, they rented a room. But within a few hours, Ginette was sick, so Albert took her home. Her grandmother asked what he had done to her. But it was a case of food poisoning. She sent Albert home to his mother. “What’s wrong, she asked. “She doesn’t want you?”

After 70 years of marriage, Albert and Ginette have endless stories and dozens of photo albums to share. The most interesting story from their seven decades together sounds like a scene from Les Misérables, but with a happy ending. 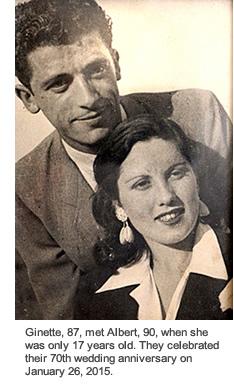 On March 11, 1954, Albert immigrated to Quebec, Canada, leaving behind Ginette and their two sons, ages two and eight. Once he found a job as an airplane mechanic, he sent money for ship passage. When Ginette received the money on August 20, she grabbed her luggage and she and the boys headed to the port, forgetting to let Albert know when she would arrive. He spent days going to each arriving ship from France. “He was so mad,” said Ginette. “But when he saw us, he wasn’t mad anymore.”

They lived in Quebec for four years before boarding a train to the United States. “It was the most beautiful train ride from Quebec to Chicago to Los Angeles,” said Ginette. They could only afford coach seats and the train food was expensive, so they only ate at the stops.

Once settled in California, they worked hard to achieve the American dream. Albert patented inventions and founded his own business, which afforded them a beautiful home on the river in Springville and the ability to travel the world. When asked what makes their relationship so successful, Albert said, “In France, the mayor is the one that marries you. When we say yes, we mean yes. We were so much in love when we got married. When we say we love each other, we love each other.” They say “I love you” multiple times a day, even now after 70 years of marriage. Ginette and Albert live in Eskaton Village Grass Valley, California.