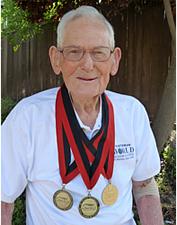 Among 11,000 competitors from across the United States and 26 foreign countries, Eskaton Village Carmichael resident Benjamin O’Brien emerged a gold medalist in the Huntsman World Senior Games’ 5 kilometer road race for men ages 95-99. His time was two minutes faster than the previous year, when he also won gold.

Ben is a decorated veteran, state and federal judge, lawyer, husband, father and grandfather and still contributing at the of 96!