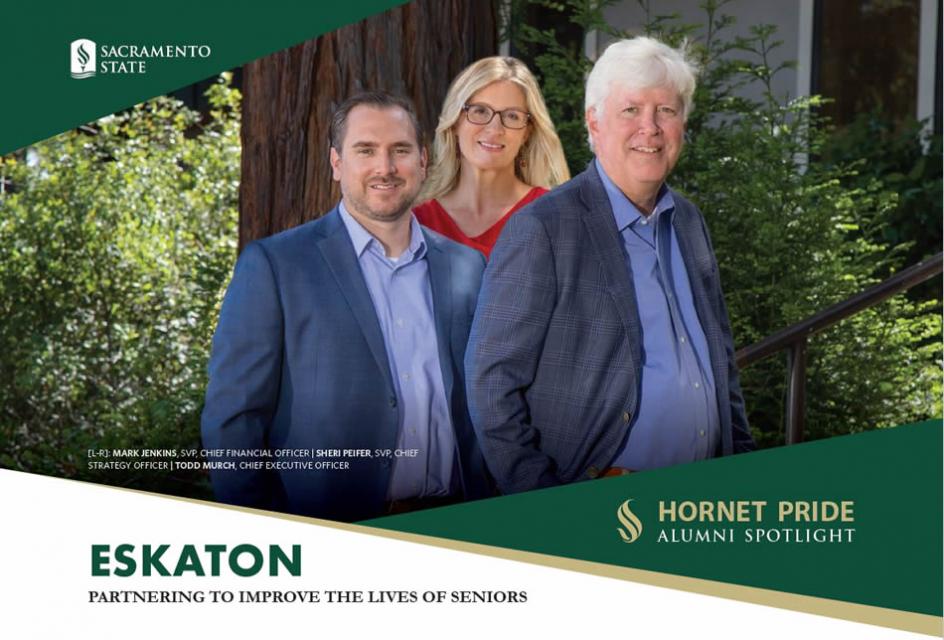 Our partnerships with Sacramento State greatly benefit us and the university, and our aging population as well.
- Todd Murch, President and CEO Eskaton

Founded in 1968, Eskaton is the largest nonprofit senior living and services provider in the Sacramento region. This integral player in our community’s senior care has numerous links to Sacramento State, including executive-level officers and more than 30 team members with Sac State degrees. “Our partnerships with Sacramento State greatly benefit us and the university, and our aging population as well,” says President and CEO Todd Murch.

At the top of the organization are three Sac State alumni, including Murch, who has a Business Administration degree and the university’s Outstanding Alumni award. Senior Vice President and CFO Mark Jenkins also earned a degree in Business Administration and Senior Vice President and Chief Strategy Officer Sheri Peifer holds an MS in Gerontology and Education.

Eskaton has long had close ties with the Sac State School of Gerontology. Eskaton head clinician and Executive Director of Quality and Compliance Teri Tift has taught gerontology courses at the university for more than 20 years and countless gerontology students have completed their required field work with Eskaton. Currently, Eskaton has more gerontology graduates on staff than ever before and three Eskaton team members are adjunct gerontology professors.

“We’ve recently cemented a commitment to fund an Eskaton Leadership and Diversity Scholarship for undergraduate and graduate gerontology students in the amount of $25,000 per year for the next five years,” says Murch. “We’re also exploring relationships with the School of Nursing, since healthcare and nursing are a large component of senior care.”

Jenkins says that Sac State’s scope of subjects, programs and schedules enables astounding flexibility, whether students are living on campus, commuting in, learning online, returning to finish a degree or working full-time and taking evening classes. “Sacramento State is the ideal university for our region, with strong programs producing top performers in so many fields,” he says. “We’re familiar with the quality and caliber of graduates and welcome them at Eskaton.”  View article on page 39.