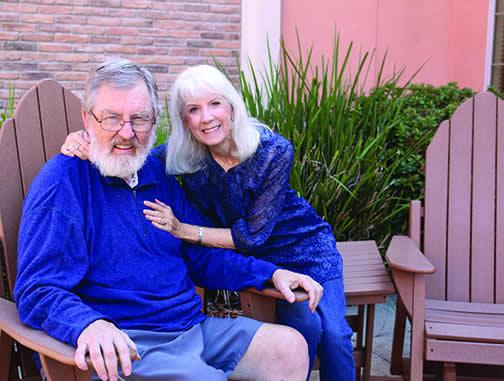 “Life is about ideas, opportunity and family.” Mark Silzer was born in Chicago and grew up in Blue Island, Illinois. Mark attended Concordia University in Chicago where he met his future wife Barbara. They were immediately smitten. Both were passionate about music, education and their Lutheran faith. They graduated from Concordia in 1969, Mark with a degree in education and Barbara with a degree in music and education.

After graduation Mark and Barbara left for a 60-day world tour with their concert choir from Concordia. They performed throughout Asia, India, Japan, the Holy Land and Europe. Five days after they returned to the States, they married and moved to Schaumburg, Illinois, where they began their teaching careers at St. Peter’s Lutheran School.

When Mark was offered the position of director of instructional media at Hong Kong International School, they moved to China. Two years later, Mark was promoted to junior high principal where he served for four years. After living in Hong Kong for several years, the family relocated to their home state of Illinois. The new family of four, Mark, Barbara and their two daughters, Stephanie and Alison, moved to Champaign, Illinois, where Mark pursued his Ph.D. in education from the University of Illinois.

After finishing, Mark was offered another professional opportunity from the Lutheran Church to oversee the opening of Valley Lutheran High School in Phoenix, Arizona. After the arrival of their third daughter, Ashley, in Phoenix, the family moved to Honolulu, Hawaii, where Mark took the position of principal of Our Redeemer Lutheran School.

After more than 20 years in education, Mark pursued a new career in computer education software. In the ‘90’s, Mark’s career brought the family to Pleasanton, California. Through numerous jobs in computer software, Mark had the opportunity to travel around the world. He even joined the million-mile club on United Airlines. His career in education added aided with consulting positions in Princeton, NJ, and Australia.

Mark’s secret to a life well lived: “Create situations in your life in which opportunities occur.” Mark also loves to travel, sail and sing. He and Barbara have always been involved in their church choir, and their home has always been filled with music and song. Mark loves singing religious hymns, but he also enjoys composing and singing playful lyrical songs that bring a smile to Barbara’s face.

In 2008 Mark was diagnosed with Parkinson’s disease. He and Barbara said that the diagnosis was an unexpected complication in their life, but they have learned to adapt to the changes and were determined to continue living their lives. For five years after the diagnosis they continued to travel, but things progressively became more difficult.

Mark’s ability to read, a lifelong passion, became challenging, and his tremors started impacting his mobility. It was decided that Mark would move to Eskaton Village Roseville to ensure additional support, so Mark and Barbara could focus on their relationship and spend time with family.

Mark’s assisted living apartment is equipped with a smart voice-controlled device, Alexa. Alexa adjusts lighting and thermostat via voice commands, so he can control his environment easily. This accessibility device, along with his wheelchair, enables Mark to live well despite challenges. Barbara lives four short blocks away and spends most of the day with Mark. Barbara feels blessed to be so close and to be able to spend this time together.

Though the diagnosis has brought complications, they believe it has also brought them closer as family. They moved to Roseville to be closer to their two daughters and 8-of-10 grandchildren; daughter Alison and family live in Washington DC. Barbara credits Mark for teaching their grandchildren about empathy and compassion. Mark taught them how to embrace differences and to truly see the person. The wisdom he shared with his daughters was: “Love the Lord, marry a good man, learn to swim and play the piano.”

As a lifelong learner, Mark strives to continue to grow and gain knowledge. Now, instead of gaining new technical skills or learning a new software program, Mark is eager to learn “to better understand people and what they are going through.” At the age of 72, Mark proves it is never too late to develop new skills.

Mark and Barbara feel blessed for their 50-year long marriage and for the life they have shared together. They look forward to continuing to live in the moment and enjoy time with their family.